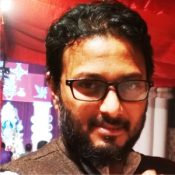 Born in 1978, he graduated from Delhi College of Arts and did MA History of Arts from National Museum Institute. At a young age he became a lecturer of Fine Arts in Rai University and worked as HOD, PGT Arts at Tagore International School, Delhi, for 14 years. He believes that children have a superior intelligence to transform into more effective creative resources. He has participated in several Art Exhibitions winning accolades for his works and paintings that are now available in private galleries, like, India Space Art Collections, Suruchi Gallery, and galleries abroad. He has worked as a performance artist giving performances for companies like Woodland, National Geographic, etc.  He was amongst the panel of experts for NCERT books on Graphic Designing. He has also worked as an actor in several short films and TV adverts. Presently he has founded ‘Harlequins’ a faculty of art and education. He joined Sansaptak a group for theatre in 1998. Ever since, he has been working as an Director, actor, activist, stagecraft, costume, properties, light, music and graphic designer and executor. Currently, he is the Chief Editor of Sansaptak’s newsletter ‘Yavanpat’, and also mentors theatre and fine art students.  Several of his fine art students have paved their career towards Delhi College of Art and other reputed Fine Arts institutions. Under the tutelage of Guru, Torit Mitra, he has Directed and Designed several plays, winning critical acclaim and accolades. He has also translated and written plays, all performed by actors of Sansaptak.

All lessons by Anjon Bose